ABC drama The Heights will air its season final this week in what is potentially the last time we will see the acclaimed drama on our screens.

The ABC is yet to comment publicly on the future of the local drama which has aired for two seasons. The Heights social media feed recently informed fans the program had not yet been renewed for a third season, adding that they “we’re not sure if it will”

The Heights has been sold to the UK where it is airing in a daytime timeslot on the BBC.

The Western Australian produced drama series which celebrates diversity, was recently nominated for four separate episodes in the Television Serial category at the Australian Writers Guild Awards. An achievement recently acknowledged in a cheeky tweet by the series co-creator Que Minh Luu.

Que Minh Luu has recently been appointed as the director of Australian originals at Netflix.

In the season finale, After spending a week with Curtis and his community, Uncle Max (Kelton Pell) and Hazel (Fiona Press) head back home for Ryan’s funeral. Having had some space to contemplate, Hazel tells Uncle Max that she doesn’t want to live in Arcadia Heights any more.

At the wake, the community share what they loved about Ryan the most. When everyone goes home, Uncle Max, Hazel, Shannon (Briallen Clarke), and Ana (Cara McCarthy) perform the smoking ceremony to finally say goodbye to Ryan. This moves Hazel and realising she’s part of a tightknit community, starts to question whether leaving Arcadia Heights is the right decision for her after all.

Mark (Dan Paris) returns home from the mines to attend Ryan’s funeral. When Mark discovers that Renee (Saskia Hampele) has sold her first house that day, he tells her that even though they are not together, they can still celebrate the good things that happen.
While Mich (Calen Tassone) finally gives Pav (Rupert Reid) and Claudia’s (Roz Hammond) relationship his blessing.

Production details: Filmed and post produced in Western Australia on the traditional country of the Wajuk People of the Noongar Nation. A Matchbox Pictures Production in association with For Pete’s Sake Productions. 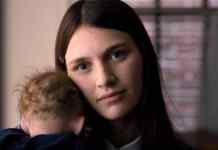