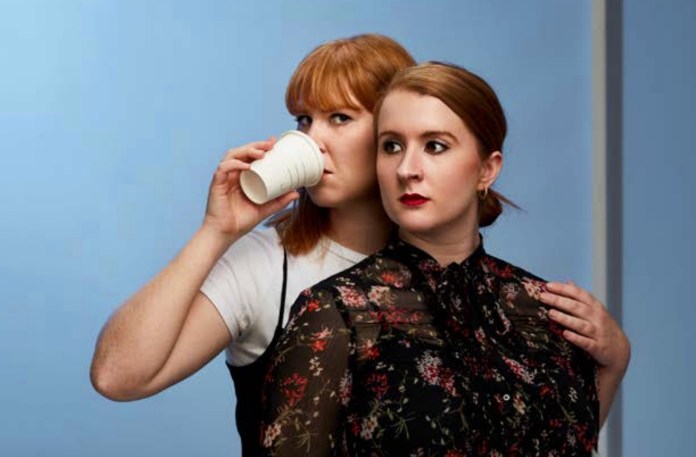 INTERNMENT, starring Pippa Mills and Helena Ruse is a twisted observation into the sometimes weird and questionable world of internships that many young people experience. As young uni students, they find themselves stuck in the unpaid internship from hell.

That is, if hell was a trendy office where no one was doing anything, populated by gormless corporate-hipsters wearing denim jackets, tiny beanies, and that look of complete sincerity that comes with entitlement.

Keen to make a good impression, however, it becomes apparent that they’re never going to accomplish the absurdly impossible tasks they’re lumped with. Overbearing yet over enthusiastic bosses trying to oversell their very basic duties, learning the harsh reality of dealing with online trolls, corporate politics and how to perfect the office coffee orders, INTERNMENT covers it all.

Emerging industry talents Pippa Mills and Helena Ruse, both of whom wrote, performed and co-created Leftovers along with Andrew Mills, have previously written and performed sketches for Foxtel Comedy Channel’s ‘The Slot’ and for ABC iView as part of their Fresh Blood comedy initiative.

Leftovers has amassed over 15,000 dedicated fans across Facebook and YouTube, with their videos clocking up over a million views. They were nominated for Video Junkee’s “Breakthrough Award” in 2017 and awarded “Best New Talent” at the Online Video Awards in 2017.

“We hope INTERNMENT provides a refreshingly honest and hilarious portrayal of the all too familiar experience of internships. Our characters find themselves in frustrating and embarrassing situations that test their limits, question their personal moral ethics and find themselves doing whatever it takes to get ahead and hopefully secure employment.”

“There is a lack of representation of strong, young female characters on Australian television but it is a demographic craving for fun, light-hearted comedy that is based on newsworthy and real life topics they can relate to.”

“INTERNMENT” is like looking in a mirror, so many of us started in unpaid internships, the storylines are definitely relatable and hopefully, a light-hearted fun poke at the current millennial working mindset.”

Kevin Perryhttps://tvblackbox.com.au/author-kevin-perry/
Co-Creator and Editor of the TV Blackbox website, Kevin Perry is an experienced media commentator focused on TV Production, Consumer Tech, SVOD & Sports Broadcasting. Media enquiries please Call or Text 0428-275-111
Previous articleFoxtel Celebrates the 50th Anniversary of the Moon Landing with Month of Special Programming
Next articleSEVEN executives look to TODAY TONIGHT as the future of HOME AND AWAY now in doubt
Advertisement

This week will see Netflix continue to expand its library of studio-produced sitcoms with the release of the new Wanda Sykes comedy, The Upshaws.

ABC and Screen Australia have announced that filming is underway in Sydney on the highly anticipated comedy, Preppers.

While the ABC has been pushing users towards setting up user profiles for the past 12 months, this latest policy change will make a login password compulsory for all users.

The 2022 Golden Globes will not be going ahead on NBC, as has been tradition since 1996, with the network severing their involvement until the issues within the organisation are rectified.

Legendary 7NEWS newsreader, Frank Warrick, has passed away, aged 76, after a five-year battle with dementia.

The dangerous abuse caused by Coercive Control – Tonight on INSIGHT