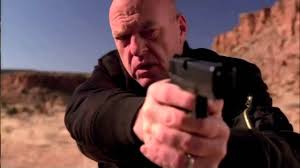 This week’s Breaking Bad opened with a reminiscence, perhaps to remind its
viewers of simpler times. In the same spot where we saw Hank and Jesse under
fire of Nazis just last week, Walter and Jesse are back in the RV working on
their first cook.  Walt takes the time to
rehearse his lie before he makes a call to Skyler to explain why he’ll be home
late. Jesse is an amateur, and unprofessional. The flashback then slowly fades
into the present, where we’re met with the aftermath of last week’s gunfight.

Hank is shot and can’t stand up. Gomez is
dead.

One of the men verifies their DEA status, and
Jack draws his gun to end Hank’s life. Walt desperately tries to stop him,
offering him the $80 million buried beneath their feet, but Hank looks at him, grimacing,
and says, “You’re the smartest guy I ever met, and you’re too stupid to see…He
made up his mind 10 minutes ago.” With stone-faced acceptance, Hank turns to
Jack and utters, “Do what you got to d– “

Jack cuts him off with a bullet to the
head.

Walt falls to the ground as if paralyzed by
what just occurred. He lies there, still in handcuffs, while Jack and his team split
up to search for a missing Jesse and dig up all the barrels of drug money
before taking off. They set Walt free, leaving him one barrel. No longer in
shock, he climbs to his feet and demands that they still owe him a job.
“Pinkman…Pinkman,” he repeats, as he stares at the underside of his car. “I
found him.”

Jesse is practically screaming for his life
as Jack and his men haul him to his knees. Todd stops them, suggesting they interrogate
him first to find out what he told Hank and Gomez, just to be safe. Later we
discover that Jesse is actually brought to the new lab to perfect Todd’s cook,
who is incidentally (through his little manipulation) proving to be a young
Walter White. However, he is still far from Walt’s current levels of
sociopathy, which we witness as he looks into Jesse’s eyes and says, “I watched
Jane die. I was there; and I watched her die. I watched her overdose and choke
to death. I could have saved her.” He grimaces with a hint of pleasure, and
adds, “But I didn’t.”

Walter, having used all his gas frantically
speeding to the desert, buys a truck off of a Native American he comes across in
the desert. In the meantime, Marie goes to the car wash to confront Skyler and
spark the destruction of the family. She explains what Hank told her over the
phone, clearly unaware of the latest events. She extends a wary peace offering
to Skyler, who she feels compelled to look after as her sister, but demands she
tells Walt Jr. about everything. Initially hesitant, Skyler gives in and
quickly uproots Junior’s entire life, off-camera. He is devastated, and Marie
makes them go home. There they find a frantic Walt packing up the family’s
belongings. A tense scene follows, where Walt urges them to pack their things
but Skyler demands to know what happened to Hank. The situation escalates, and
soon a bleeding Walter is struggling with Skyler over a bloody butcher knife.
He soon finds himself looking over his family with the knife in his hand, met
by an intense fear in their eyes as he desperately whispers, “We’re
family…we’re family.” Before the words are even fully out Walt realizes just
how untrue they are, as his 16-year-old son turns on him and calls the police.
With tears in his eyes, Walter grabs his daughter and last chance at family,
and takes off.

The next we see him, Walt is in a public
bathroom changing Holly. She begins to sob, asking for her mommy, and Walt
understands that he has officially lost the support of every member of what he
once called his family. He calls Skyler, who has the police at her home with a
recently issued amber alert. They monitor the call as he expresses his anger
and blames her for what happened. He spews insults and verbal abuse, saying
with pure vehemence:

“You stupid bitch… How dare you?”

He has all the airs of an abusive husband,
and the police catch it all on tape. He threatens her to “toe the line,”
admitting that Hank is dead and promising her a similar fate if she crosses
him.

When she asks him to come home, he simply
replies, holding back a sob, “I’ve still got things left to do.” He then breaks
apart his phone, and turns to look at his sleeping daughter with tears in his
eyes. She is the one member of the family who still has a chance to escape the
horrors of their world. Hoping to set her free from him and the shambles of the
family he just left, Walt leaves Holly in the fire station across the street to
be found within the hour. In the meantime, he sets off to find his own fresh
start in the red van of Saul’s “disappearing guy.”

So what of the title, “Ozymandias”? The poem of
the same name, written by Percy Shelley, is about the inevitable decline of all
mighty empires and their leaders. Walter White, whose own name is derived from
another poet (Walt Whitman), has always claimed not to be in the money business
or the drug business, but the “empire business.” Now he and his empire are
quickly being reduced to a pile of rubble, and only two episodes remain before Breaking Bad fans everywhere will know Walt’s ultimate fate.

Aaron Paul reprises his role as we find out what happened to Jesse Pinkman, yo

In this first of three special series podcasts Stan Australia's CEO Mike Sneesby chats with Steve Molk about the state of SVOD in Australia, what it takes to secure first-run content and rolling the dice on original programming.