The original series was commissioned as a direct result of the cancellation of many of Australia’s most-loved comedy festivals and tours, including the Melbourne International Comedy Festival and Sydney Comedy Festival.

Created by Stan and Guesswork Television, the Australian Lockdown Comedy Festival is a four-part series which will showcase the cream of Australia’s comedy crop.

Starting on the 9th of May, each episode will feature at least six different comedians performing short standup comedy spots captured by cameras delivered to their homes.

Dealing with the highs and lows of lockdown, some of Australia’s biggest comedians will be putting on rare and raw performances from the comfort of their own homes. Their audience will range from loud and loveable kids to adorable pets, bathroom mirrors, empty lounge rooms and laundry baskets. You’ll see them in their bathrooms, bathrobes, baths, bedrooms and kitchens but most importantly, they’ll be streamed directly into Australian homes ready to make us laugh.

Australian Lockdown Comedy Festival premieres Saturday, 9 May at 7pm AEST, only on Stan.

10 Play have compiled the biggest and most binge worthy shows to help fill the time of those currently social distancing.
Read more

From the US riots and journalists being targeted by Police, to the rumour Seven are selling their Olympic broadcast rights - it's all here on the TV Blackbox podcast!
News

The Tailings takes place in her tight-knit, remote community in the wilderness of the West Coast of Tasmania.
SBS

Australians turned to the ABC in record numbers during Australia’s bushfire crisis.

The ABC’s role in providing a rolling source of information was crucial in allowing people to be informed and aware of danger, to make plans, and in evacuating.
10 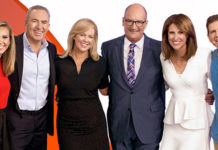 CAMERON DADDO discovers noble ancestors in this week’s WHO DO YOU THINK YOU ARE?