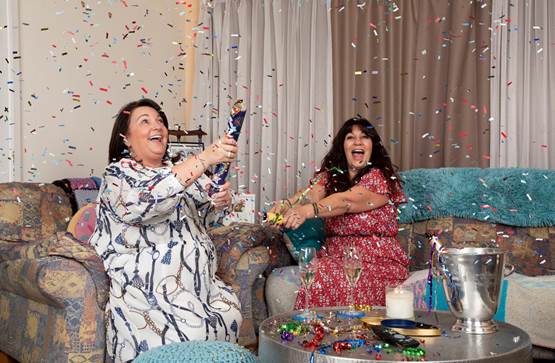 Pop the champagne and settle in to celebrate the milestone 100th episode of the highly successful local production Gogglebox Australia, tonight at 7.30pm on Foxtel’s LifeStyle channel. Currently in its 11th season, Gogglebox shows no signs of slowing down, as the most watched program on the Foxtel platform every Wednesday night it has aired this year.

Goggleboxers from the very first episode, Lee and Keith can’t believe it. “I thought it was a ridiculous idea when we were first approached by a casting agent. I actually politely told her to go away!” says Lee.

“It’s hilarious to think we’ve done 100 episodes and people still want to watch us. Cheers to that and a big thanks to all the fans who love the show. It’s a lot of fun for us.” says Keith.

In the 100th episode our Goggleboxers tune in for the launch of Nine’s Lego Masters, thank those on the front line of the pandemic with Nat Geo’s coverage of One World: Together At Home, and explore the Australian landscape with David Attenborough on Nine’s Seven Worlds One Planet. The first elimination challenge of 10’s MasterChef Australia All Stars had their tastebuds tingling, while SBS’s screening of the award-winning docu-film about free climbing, Free Solo saw many of our Goggleboxers on the edge of their seats.

Gogglebox Australia is an Endemol Shine Australia production for Foxtel and Network 10 and airs Wednesdays at 7.30pm on LifeStyle and the following day at 8.30pm on 10.

There’s no doubt COVID-19 has caused great uncertainty in the world, but does that mean we should now ignore the scientists, doctors and even politicians?
Read more

Q+A is simulcast LIVE around the country on ABC TV, ABC iview and ABC NEWS on radio. ABC Australia also broadcasts Q+A in to Asia and the Pacific.
Read more