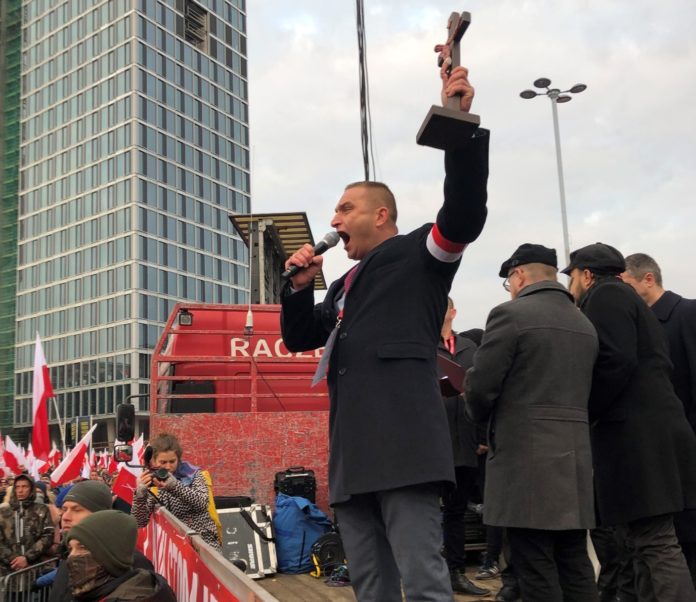 When Poland’s Archbishop of Krakow talks about fighting a plague, he’s not talking about the new coronavirus. He’s talking about gay rights.

“A certain ideology is a threat to our hearts and minds…so we need to defend ourselves just like against any other plague”, says Archbishop Jedraszewski.

In the 1980s Poland played a central part in liberating the world from communism. Now there’s a push to wind back many of those hard-won freedoms.

The Catholic church and the Polish government are forming a holy alliance, joining forces to denounce Western-style liberalism as the new enemy.

“From the very beginning the history of the Polish state and Polish nation were connected with the history of Christianity”, says Archbishop Jedraszewski.

“Christianity, nation and state were so tightly connected, they were almost inseparable.”

In today’s Poland, the church is supporting government moves to discriminate against gay people, wind back sex education and outlaw abortion.

But feminists, gays and liberals are fighting back.

Foreign Correspondent’s Eric Campbell reports on a deeply divided nation in the throes of a culture war.

He meets the Archbishop of Krakow who likens gay activists to the much-reviled Soviets who occupied Poland after the Second World War.

“This time it is not a red but a rainbow plague”, says Archbishop Jedraszewski.

Regional governments across Poland have declared about a third of the country ‘an LGBT free zone’.

Eric interviews critics of the current government, including Lech Walesa, the father of Polish democracy, who warns “our Constitution is being broken, the separation of powers has been violated and we have to do something about it.”

He meets a gay mayor in a small town who says the rhetoric from church and state is leading to an “increase in hatred spreading against homosexual people.”

And he films at a far-right rally in Warsaw where Catholic extremists are co-opting the church in their bid to push their nationalist agenda and vision of Poland as a new theocracy.

While many Poles believe a religious revival will lead their country to the light, others fear it is opening the gates to something darker.

Foreign Correspondent:  A New Crusade Tuesday 28th April at 8pm on ABC and on iview.

Media Release
Previous articleGOGGLEBOX AUSTRALIA celebrates its 100th episode
Next articleFoxtel in trouble, Quotas out the window, and our NEIGHBOURS go back to work | TV Blackbox S04E11
Advertisement

This week, Hamish Macdonald returns to the Q+A host chair as we talk disability, autism, and the big stories of the week.

The CEO of Channel 7 described Channel 10’s Up Close sales reel as ‘desperate’. Is he right or was 10 pitch perfect talking to advertisers? This is TV Blackbox S05E19

MONSTERS AT WORK, BLACK WIDOW, and more coming to Disney+ in July, including the season finale of LOKI

Disney+ in July 2021 includes some big Marvel hits like Black Widow and the season finale of Loki, but also tugs on the nostalgic heartstrings with Monsters at Work, a series spin-off of Monsters Inc.

Broadcasting live from the regional town, Paul will meet with local performers and visit the town’s top tourist destinations, showcasing the very best of the region to encourage Australians - where they can - to make Gladstone and tropical Queensland their next holiday destination.

Apple today released the official trailer for “Watch the Sound with Mark Ronson,” a new six-part docuseries that examines sound creation and the revolutionary technology that has shaped music as we know it.

EURO 2020 Round of 16 fixtures now confirmed

The UEFA EURO 2020 group phase came to a close this morning (AEST), with four phenomenal fixtures featuring a whopping 18 goals deciding which nations advanced to the Round of 16 and establishing a tantalising set of fixtures as the tournament enters the knockout phase.

SBS has announced the appointment of Julie Eckersley as its new Head of Scripted, to oversee an expanding slate of locally commissioned fiction content, and related industry initiatives championing inclusion in the Australian screen sector.

STEVE MARTIN, MARTIN SHORT, and SELENA GOMEZ star in new series, ONLY MURDERS IN THE BUILDING

The DEEPFAKE Videos that are changing reality – Tonight on FOREIGN CORRESPONDENT