SUNRISE wins the battle of breakfast in 2019

While there are still a few weeks left of 2019, the ratings year has been run and won for breakfast*, and again it’s Seven’s SUNRISE triumphing. The Today Show is a distant second, with ABC’s News Breakfast snapping at its heels.

Seven’s breakfast workhorse, hosted by Sam Armytage and David Koch, was not beaten once this year. It drew its largest audience on Tuesday 12 November (329,000), and even its lowest audience (235,000 Mon 07/10/19) was still 7,000 viewers better than Today’s best all ratings year.

Executive Producer of Sunrise Michael Pell was effusive in his praise for the Sunrise family:

“Congratulations to the entire team on a terrific year. Thanks to our viewers for starting their day with us. Stay tuned for an even bigger 2020.”

The Today Show peaked its highest figures (238,000 Wed 16/019/19) on the third day of its the new team lead by Georgie Gardner, Deb Knight and Tom Steinfort at an outside broadcast for the Australian Open. That day was also the closest it ever got to Sunrise (251,000). 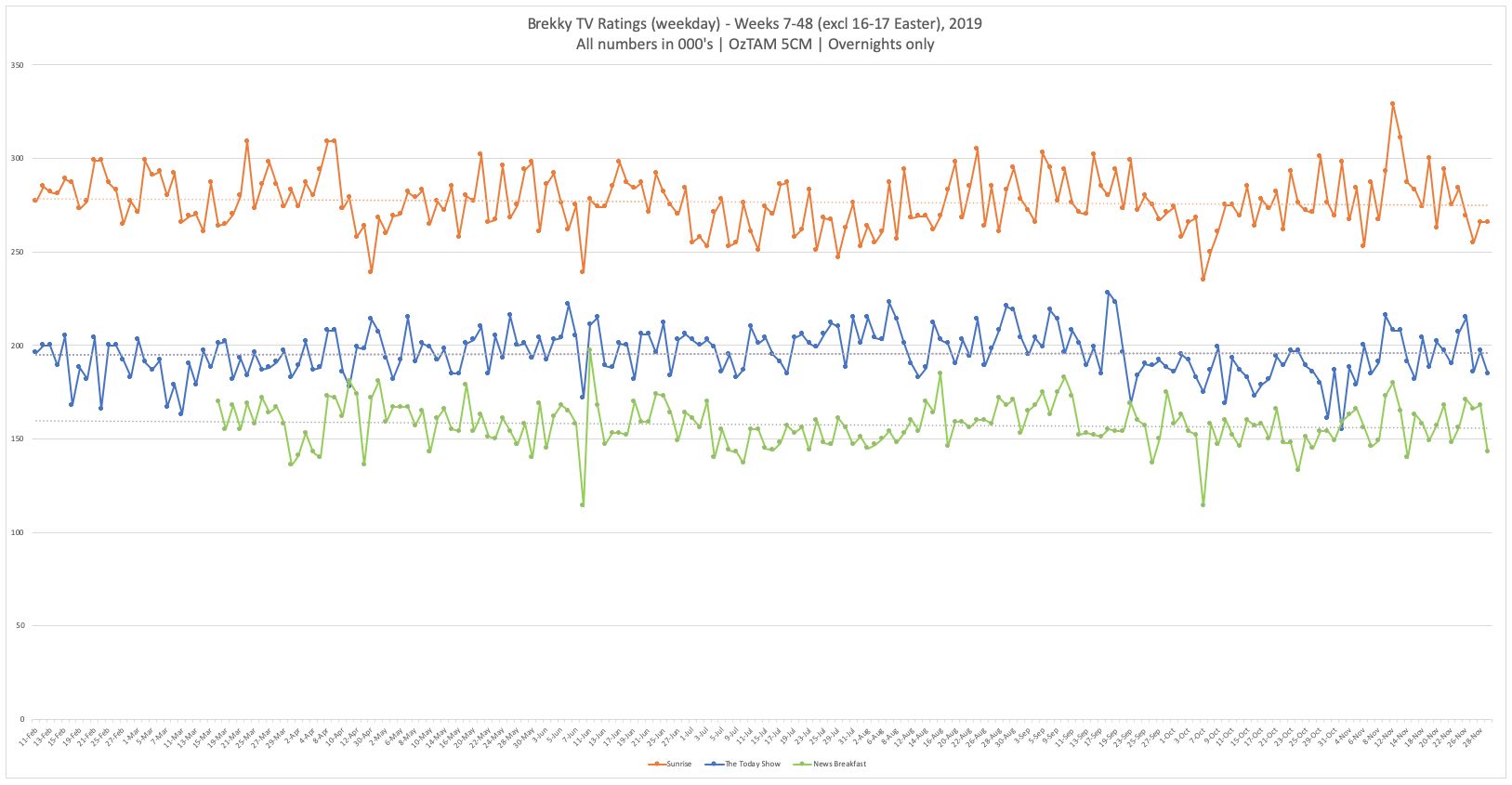 As you can see from the dotted trend lines in the data for this period The Today Show grew audience across the ratings year, though remained a distant second to Sunrise.

We get a slightly different picture when we look at the raw data from week 3 through to the end of week 48: The trends indicate all three programs dipped in audiences across the year, though Sunrise by only the smallest amount. The Today Show’s drop is more significant and very likely a large part of the impetus by Nine management to scrap the 2019 on-air team and re-staff it with Allison Langdon and the back-from-the-wilderness Karl Stefanovic for a big 2020 push.

2019 was another decisive win for Sunrise, and leaves the heady days of 2016 when Today claimed the breakfast win based on number of weeks won vs Seven’s determining metric of average audience across complete number of days. There’s no chance of that for some time again now, allowing Sunrise to extend it’s unbeaten streak for at least the year ahead. Steve Molkhttps://tvblackbox.com.au/author-steve-molk/
Steve Molk is sharply focused on the business of TV in Australia across all its formats - FTA broadcast, commercial, subscription, catch up & SVOD. Based on the Central Coast of NSW he's a passionate advocate for Australian-made programming, particularly drama and comedy. He loves podcasting, gaming & watching too much TV. For all media enquiries please call or text 0401-709-405
Previous article10 extends News to 90 Minutes as Grant Denyer is sent to Bold
Next articleNINE returns to number one with Channel and Network wins for the 2019 ratings year
Advertisement

GREENLAND to launch directly and exclusively on Amazon Prime Video