It was basically everything we expected. Nine have stuck with their performers (with a few tweaks), and added in some new stuff to spice up their line-up. It looks to be a dependable 2019 for the home of the dots. 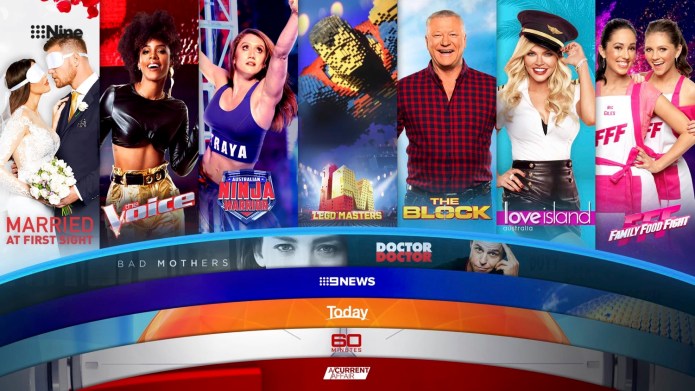 Nine Entertainment Co released their 2019 line-up at Fox Studios in Sydney tonight, reminding us that their programmatic dependability across the ratings year and ability to achieve wins in key ratings demographics was what set them apart from the competition.

All their big programs are back:

The big announcement was the revival of SeaChange with Sigrid Thornton and John Howard returning to the much loved show which originally aired on the ABC. They also talked up their already announced new shows in competition show LEGO MASTERS – which looks really, really fun – and new Aussie dramedy BAD MOTHERS (sadly now without Jessica Marais, but with added Melissa George), made by the team at Jungle Entertainment (A Moody Christmas, No Activity) & NZ-based Filthy Productions.

A sizeable chunk of the crowd expecting to hear news of the Nine/Fairfax merger were slightly disappointed as CEO Hugh Marks reminded them that, while this week had been reasonably brutal on the stock exchange, the intention was to proceed once approved by the appropriate authorising bodies. There is a lot of expectation inside the Nine boardroom about the merger. 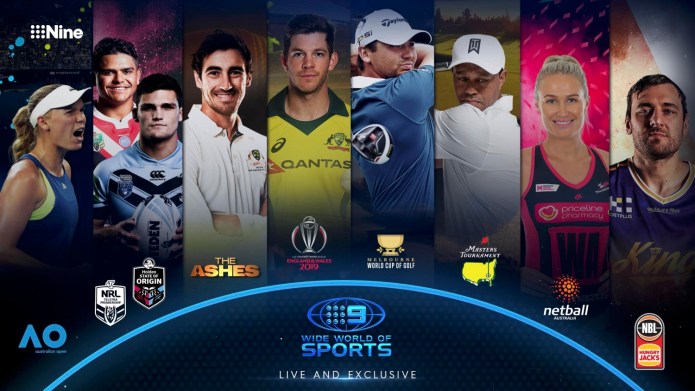 Of course the big news in sport was the AUSTRALIAN OPEN and WWOS boss Tom Malone was super keen to talk about that, along with the continuing deep relationship with the NRL and a growing one with NETBALL AUSTRALIA and the NBL (the latter two building on a mutually beneficial deal that sees games in primetime on Nine’s primary channel).

They also didn’t waste a minute reminding everyone that Nine was still the spiritual home of cricket and the upcoming ASHES tour.

Key to Nine’s platform was their reminder that when they sign a deal for live sport, it’s across all the platforms of Nine – especially digital. No specific subscription apps (*cough* NRL), no additional other download required to be able to live-stream their sports catalogue. They noted (not surprisingly) that the biggest pick-up for 9NOW subs for men was about sport and they were watching longer (~30 min), suggesting in a taxi or on public transport between the office and the pub where they’d watch with mates. 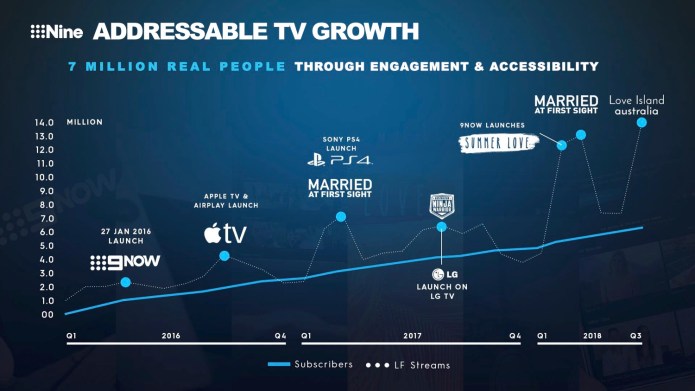 Nine’s digital strategy, though a bunch of news around their summer streaming acquisitions and other detail was released earlier this week, was a real centrepiece of the presentation to buyers. Lots of talk about ‘real people’ connecting to 9NOW and Nine being able to use that to offer ‘real’ addressability, targeting ads at specific demographics ensuring better response from the market. There was also talk of new self-service style ad-buying and management platforms developed in-house by Nine which seemed to get a lot of interest from the appropriate sections of the crowd.

The night ended with a huge party in the studio next door, with a number of program-themed activations – including a ferris wheel – and enough food and drink to dance the night away.

Nine appeared confident where the edges were rough from 2018 they’d be able to smooth them over in 2019, and that their new offerings would also help lift and not lean. There was the constant reminder that Nine’s schedule is programmed across the ratings year and that they don’t struggle in the back half like others might (ouch). There was lots of energy and optimism about what the coming year will hold, and in some quarters breathless anticipation around the deal that would make them the largest media company in Australia’s history. No matter which way you carve it 2019 is going to be massive for Nine.

For the full press release, read this article.

(Steve Molk attended this event as a guest and at the generosity of Nine Entertainment Co.) Steve Molk
Steve Molk is sharply focused on the business of TV in Australia across all its formats - FTA broadcast, commercial, subscription, catch up & SVOD. Based on the Central Coast of NSW he's a passionate advocate for Australian-made programming, particularly drama and comedy. He loves podcasting, gaming & watching too much TV. | Call/Text 0401 709 405
Previous articleAIRDATE | SBS is looking for Australia’s CHILD GENIUS
Next article#9Upfront special – TV BlackBox
Advertisement