13 Reasons Why follows teenager Clay Jensen (newcomer Dylan Minnette) as he returns home from school to find a mysterious box with his name on it lying on his porch.

Inside he discovers cassette tapes recorded by Hannah Baker (newcomer Australian Katherine Langford) —his classmate and crush—who tragically committed suicide two weeks earlier. On tape, Hannah explains that there are thirteen reasons why she decided to end her life. Will Clay be one of them? If he listens, he’ll find out how he made the list.

Through Hannah and Clay’s dual narratives, 13 Reasons Why weaves an intricate and heart wrenching story of teenage life that will deeply affect viewers.

Executive produced by Selena Gomez, and with episodes directed by Academy Award winner Tom McCarthy (Spotlight), all 13 episodes of this young adult drama launch globally on Netflix on Friday 31 March 2017.

There is more live Cricket action with the T20 series, plus India will also face AustraliaA in the lead up to the First Test on Fox Cricket.
Football

The Seven Network today announced Anna Stone’s appointment as Seven Motorsport Executive Producer ahead of a turbo-charged 2021 of motorsport on Seven, headlined by the much-anticipated return of Supercars.
Cricket

Cricket’s #1 commentary team has just got even better, with the Seven Network adding two of the game’s all-time greats – Sunil Gavaskar and Brian Lara – to its star-studded line-up for what is shaping up as a spectacular 2020-21 season. 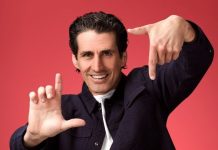