The Walking Dead is Back Baby!

The brand new season of The Walking Dead premiered yesterday and Arthuz settled in to check out the bloodfest! 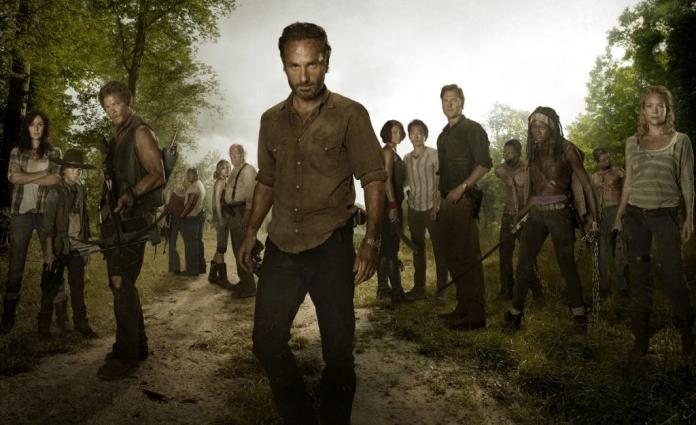 Website wagers worldwide may be up in arms
and shaking their keys over the addition of new showrunner Scott Gimple grabbing
hold of the entrails and doing his best rendition for the masses with a
deliberately paced episode planting the seed for a growing number of
screech-mouthed walkers to get greeted with a gory goodbye. It may be true that
“30 Days Without An Accident” is an impressive number of days without incident
but there’s a reason streaks are exciting, everyone knows they don’t last.

The ramp up for the ‘run’ includes Cupid
striking a few new couples in the chest with a love arrow. Sure, not all
romantic entanglements are meant to last so it should be no surprise when a few
don’t make it down the aisle before trouble starts raining on their parade. Uncork
a bottle of vintage vino and the party crashers start falling from the sky.

The slaying continues when the run isn’t
the smoothest of missions meanwhile the woods are full of newfound farmers and
women of the wild. While an afternoon picnic with a dirty stranger piques the
incognito libido of most people, Rick’s (Andrew Lincoln) caution is for good
reason as sharp edges stave off shared futures, another starving slobberer goes
snackless, and a femme fatale meets the tip of a fateful finale. There’s a
reason you don’t name the meat sacks about to be future carpet mush.

With the Governor gone the Council builds a
foundation as Rick cultivates an inner reflection from the fertile soil. Clandestine
slashing lessons in the library keep Carol (Melissa McBride) and Carl (Chandler
Riggs) apart. A bunless oven stays warm for Glenn (Steven Yeun) and Maggie
(Lauren Cohan) and new characters emerge and other characters hope for a last
kiss but settle for a last meal. Everyone grieves differently and some don’t
grieve at all, but just don’t bet on Beth if you think your besties.

As the sickness finds new carriers a
gnawing question remains. Is it still safe inside? The problem with believing
in a false sense of security is your left scrambling for dear life when the
roof caves in all around you. Nowhere is it safe in The Walking Dead even as the fence is wrapped up like a sick pig in
a blanket, littered with the predictable carcass fodder, danger lurks around
ever corner.

As this season springs forward what’s sure
to sprout is a bucket of brainless possibilities of unabashed bashed in brains
getting beaten by the likes of Daryl (Norman Reedus) and crew that keeps the
kids lining up for storytime. Its not just Rick who learns any attempt to bury
the intense desire within is only going to produce more bloodshed and more
destruction, it’s all of us. To escape it is impossible. To ignore it is
ignorant. To embrace it is to embolden the chance of survival.

Final season of THE WALKING DEAD coming to Binge

The eleventh and final season of The Walking Dead is coming to Binge on Monday, 23 August.

THE WALKING DEAD returns with more new episodes on BINGE

Last on The Walking Dead, we witnessed the fall of Alpha (Samantha Morton) and Beta (Ryan Hurst) and the end of the Whisperers War.