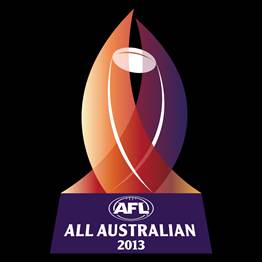 Throughout September FOX FOOTY continues with live and
exclusive coverage of key AFL events, including one of football’s biggest
nights the 2013 Four ’N’ Twenty AFL All Australian Awards next Monday
16 September from 7.30pm EST.

The game’s best performed players will be announced in the
honorary team as judged by legends of the game including FOX FOOTY’s own Mark Ricciuto and Danny
Frawley.

Whateley and Robinson will then
join Mike Sheahan on a panel alongside Gerard Healy as
he hosts the reveal of the 2013 All Australian team, where the
award winning journalists will debate the ins and outs of this year’s team with
the selectors live from 8.30pm EST.

Then stay tuned following the reveal for On the Couch,
when Gerard Healy and Mike Sheahan are joined
by Paul Roos and players from the 2013 All-Australian team.